A common group of drugs taken for heartburn, acid reflux or peptic ulcers, could increase risk of dementia by 44 per cent, study finds:

A popular type of indigestion and heartburn pill taken by millions of Britons could increase the risk of dementia by 44 per cent, according to a study.
Researchers found that people aged 75 or older who regularly take proton pump inhibitors (PPIs), a group of drugs that includes Pantoloc Control and Zanprol, had an increased risk of the disease.

The drugs work by lowering the amount of acid produced by the stomach and are prescribed to millions of Britons every year for heartburn, acid reflux or peptic ulcers.
The German study was based on the insurance data of 74,000 people over 75 from 2004 to 2011.

• David Baddiel: ‘I fear I have dementia at the age of 51’
• Lifecoach: How to cope with acid reflux

It identified 29,510 patients who developed dementia during the study period. But among the 2,950 of the total who regularly took PPIs, a greater proportion had dementia, giving them a 44 per cent increased risk compared with those who had not taken PPIs, the Daily Mail reported.
The scientists, from the German Centre for Neurodegenerative Diseases in Bonn, acknowledged that they had been unable to identify different risk factors for dementia.

They wrote in the journal JAMA Neurology: “The present study can only provide a statistical association between PPI use and risk of dementia. The possible underlying causal biological mechanism has to be explored in future studies.
“The avoidance of PPI medication may contribute to the prevention of dementia.”
Separate US research by Stanford University last year found a possible link between PPIs and heart attacks.
Dr Laura Phipps of Alzheimer’s Research UK said: “This study doesn’t tell us definitively that the drugs directly cause the condition. The next step will be to investigate the possible reasons for this link.”
John Smith, of the Proprietary Association of Great Britain, which represents firms making over-the-counter drugs, said: “All over-the-counter medicines have been approved by the Medicines and Healthcare Products Regulatory Agency and are rigorously assessed for safety and efficacy.
“Once on the market, their safety is continually monitored in light of any emerging evidence. Those who may be concerned should speak to their GP or pharmacist before taking any medicine.”

What is dementia?
Dementia is a loose term used to describe different degenerative disorders that trigger a gradual loss of brain function – thinking, remembering and reasoning.

Is it the same as Alzheimer’s?
Alzheimer’s is the most common form of dementia, accounting for around 62 per cent of all diagnosed cases.

Who gets it?
In most people, symptoms first appear in their mid-60s. An estimated 850,000 people in the UK have dementia, with the number set to rise to more than a million by 2025.
Is there a cure?

The disease is progressive and currently incurable, though there are treatments to reduce the symptoms. In the end it robs the sufferer of the ability to carry out the simplest tasks.
What causes it?

The causes are still not completely understood. Scientists believe genetic, lifestyle and environmental factors all play a role.

To read the full article, please copy & paste in the url address:

If asked what they consider to be the primary component in maintaining healthy bones, most people would probably suggest calcium, and lots of it. But like one writer puts it, ingesting calcium by itself is like trying to build a brick wall without the mortar; the other vital components to structural integrity are missing from the equation. Current research is suggesting that maintaining the proper pH level in the blood is the primary factor in maintaining overall bone health, with calcium playing a supporting role in achieving this end.

Maintaining pH balance in the body has become an important subject of modern health research as it is being concluded that general wellness is predicated upon it. The human body is designed to maintain a pH level of roughly 7.3, or a slightly alkaline state, in order to properly assimilate nutrients and fend off disease. Drawing continually from alkaline-forming compound reserves that are maintained through proper nutrition, the body is able to self regulate as long as it is receiving an alkaline-rich diet. Without it, the body can drop into the acidic range with no recourse, making it susceptible to diseases like osteoporosis and cancer.

Dr. Otto Warburg, a medical doctor and one of the leading German biochemists of the twentieth century, won a Nobel Prize in 1931 for discovering that cancer cells are anaerobic, meaning they function without the presence of oxygen. Oxygen actually inhibits the growth of cancer cells and ultimately kills them. Based upon his foundational research, many nutrition-based doctors and scientists have been able to conclude that an alkaline-rich diet is able to keep the blood oxygenated and the cells healthy.

What does all of this have to do with calcium and bone loss? Calcium is an isolated mineral that requires other vitamins and minerals in order to properly assimilate and function as intended. Additionally, only in an oxygen-rich alkaline environment is calcium able to build strong and healthy bones. The problem lies in the fact that the typical Western diet is highly acid-forming, rendering calcium intake largely ineffective.

Most people identify milk and other types of dairy products as the primary sources for obtaining calcium. Dairy products are acid-forming foods that, apart from adequate intake of alkaline-forming foods, can severely compromise pH balance in the body. In the case of a threatening imbalance, the body begins to draw alkaline-forming compounds from the bones, including calcium, to maintain proper pH. As a result, the body can actually leech more calcium than it is receiving, leading to osteoporosis and other serious diseases.

The solution to avoiding pH imbalance and the resulting calcium leeching is to maintain a rich alkaline-forming diet by avoiding excess acid-forming foods. Professor Jurgen Vormanne of the Institute for Prevention and Diet in Ismaning, Germany has developed a helpful food chart that outlines foods and their pH effect on the body. There are also other helpful food charts available online that will assist in understanding acid- and alkaline-forming foods.

Maintaining healthy bones first requires proper nutrient intake in order to maintain a balanced pH level, allowing the blood to effectively assimilate calcium and the necessary nutrients such as magnesium, potassium, and vitamin D which work correspondingly to maintain and fortify the bones. Apart from one another these crucial components will not perform as intended, but together they are a powerhouse of bone-building material and defense against osteoporosis.

What it is: an infection that appears as yellow or white spots on your nail. As the fungus spreads, the nail can thicken and even pull away from its bed.

The Reason: Fungus thrives in warm, dark moist conditions. So you get it from tight shoes. wet floors in showers or gym locker rooms or unsterilized tools in nail salons.

The Remedy: Wear sandals or shoes at the pool or gym. Avoid cotton or wool socks; instead choose synthetics, which don’t hold moisture. dust your feet with anti-fungal powder after bathing and before bed .For treatment, rub on Grampa’s Salve It’s much less expensive than Lamisil and very effective. 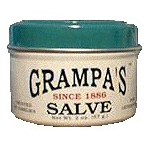 If you decide to try this product you may order here.

Migraines linked to consumption of water from plastic bottles and cups

Research has found that the chemical BPA is not only linked to obesity and heart attacks, but also found that BPA in the packaging of certain plastic cups and water bottles can trigger painful migraine headaches. The new study, which took place at the University of Kansas, links BPA, a chemical found in many plastics, to migraines.

To read the full article, please click the link below: